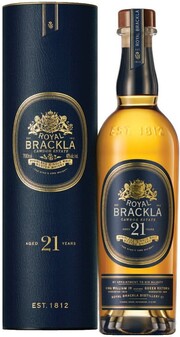 Similar to "Royal Brackla" 21 Years Old, in tube, 0.7 L
price
$ 481
Available
You can Notify Availability or buy another product
Add to wish list
Order by phone
+7 (495) 988-45-58 Call us
Our wine consultant (sommelier) will help you choose the wine to the table or as a gift. And will respond to all your questions on the wines.
Call Me Back

The taste of the whiskey is made of sweetish notes of sherry, nuts, delicate shades of oak, spices, herbs, candied orange, dark chocolate and honey. The beautiful long aftertaste are the nuances of candied orange fruits that are disappearing, leaving the dry hints of oak and spice.

In the mature whiskey aroma dominated by floral tones, complemented by notes of oak and vanilla.

Whiskey is excellent as a digestif.

"Royal Brackla" 21 Years Old - top of the range single malts "Royal Brackla," which can be called exclusive, moreover, that such a solid age the whiskey is quite rare among new releases. With representatives of the previous line (12- and 16-year-old) whiskey "Royal Brackla," 21-year-unite typical grassy notes. Maturing whiskey in oak barrels and casks of sherry whiskey flavoring cream texture, a good balance between sweetness and spice, and greater durability.

Royal Brackla distillery was built in 1812 by Captain William Fraser of Brackla and originally called "Brackla". The prefix "Royal" - "Royal" - she won in 1835, when it became whiskey supplier to the court of King William IV, Queen Victoria gave as an official royal permission for production of whiskey. This title is a great honor, considering that only three distilleries have a definition of "royal" in its name. Since 1898 the distillery changed hands several times, rebuilt and expanded, but the production did not stop and even doubled by 1970. In 1985, Royal Brackla was closed. The plant was reopened in 1991 and still operates. The owner of the distillery is John Dewar & Sons.