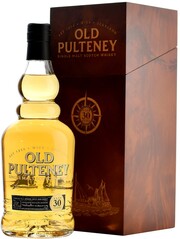 Similar to Old Pulteney 30 Years Old, wooden box, 0.7 L
price
$ 367
Available
You can Notify Availability or buy another product
Add to wish list
Order by phone
+7 (495) 988-45-58 Call us
Our wine consultant (sommelier) will help you choose the wine to the table or as a gift. And will respond to all your questions on the wines.
Call Me Back

The taste of whiskey with a pleasant texture, fruity notes, with emphasis on tangerine and lime, hints of spices, honey and vanilla. In the long dry aftertaste sea nuances, and hints of pepper and oak.

Whiskey good use as a digestif.

Old Pulteney 21 Year Old - an explosion of life, charisma and personality. This single malt third in the history of the competition "Jim Murray's Whisky Bible" was recognized as "Whiskey of the Year" in 2012, earning a record 97.5 points out of 100. For its extracts are used old barrels of bourbon (1/3) and sherry Oloroso (2/3). Barrels, which were stored sherry (mainly dry his grade - "Fino"), were made of wood and partly American Spanish oak. This feature will add even more complexity, depth and character of the excellent whiskey. Whiskey has won numerous awards, including the 2014 can be noted gold from "Jim Murray's Whisky Bible", the money in the "International Spirits Challenge" and the "International Wine & Spirit Competition", two gold medals at the "San Francisco World Spirits Competition 2006" .

Old Pulteney factory was founded in 1826 by James Henderson in the fishing town of Vic in the extreme north-east of Scotland. The city, which in the XVI century called Pulteneytown, situated next to the River Vic. Interestingly, in the middle of the XIX century reconstruction of the city led by engineer Thomas Stevenson, father of the famous writer Robert Louis Stevenson. Distillery Old Pulteney, as the city was named after Sir William Pulteney, the governor of the British Society of Fisheries. In the XX century the plant was mothballed for 20 years and reopened only after 1951. Who owns the plant Inver House Distillers. There are still using two distillation cube old model. One of them have a conventional apparatus for the bent neck. Legend has it that when the cube was taken to the place, he was too tall to fit in the factory building. Solve the problem is very simple, cut the top part of the machine. Bulbous neck design modern bottle Old Pulteney distillery resembles the shape of a cube.