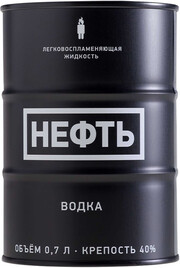 price
$ 42
Available
Add to wish list
Find similar
Reliable purchase
Quality Assurance
Visa, MasterCard
Order by phone
+7 (495) 988-45-58 Call us
Our wine consultant (sommelier) will help you choose the wine to the table or as a gift. And will respond to all your questions on the wines.
Call Me Back

A strong and vibrant original flavor vodka gradually wears off and becomes the subtle nuances of alpine herbs.

Vodka can be supplied to the hot and cold dishes, is a classic for Siberian cuisine: dumplings, salted, smoked, venison steak or fish. In order to maximize disclosure of flavor, vodka must be submitted in the decanter.

Vodka "Neft" according to the creators - "a unique product for smart and efficient people." Its production is based on the Austrian high-quality grain and the purest spring water. Completely eliminated from the formulations of artificial additives, flavors, sweeteners and softeners, since good vodka they just do not need. The special treatment of grain, multiple step distillation and purification of carbon distillate possible to obtain exceptional purity alcohol, which when combined with water as much as possible "friendly" is perceived by the body and is characterized by the natural sweetness of the lightest. Interesting themed pack a barrel of oil is not only the original performance, but also easy to use.

Vodka "Oil" - is not just vodka. This embodiment of the idea, the memory of the past, a tribute to the people of heavy profession produce oil because of the titanic efforts of the steel and character. Creators of vodka "Oil", three Russian engineers working in Siberia, have experienced all the hardships of life oil and know firsthand about their difficult everyday life. Such an experience never forgotten, so many years later, having succeeded, they realized his dream of creating the purest of strong masculine drink.

When choosing the place of production of vodka "Oil", it was decided to appeal to the Austrian specialist company Freihof, whose experience and knowledge allowed as accurately as possible to realize all the wishes. Frayhof company since 1885 successfully producing spirits. Its range - brandy, cognacs, liqueurs, each of which meets the highest quality standards, established over many years in this market segment.