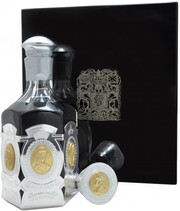 Similar to Hart Brothers, "Dynasty Decanter" Glenfiddich 42 Years Old, 1964, gift box, 0.7 L
price
$ 8 746
Available
You can Notify Availability or buy another product
Add to wish list
Order by phone
+7 (495) 988-45-58 Call us
Our wine consultant (sommelier) will help you choose the wine to the table or as a gift. And will respond to all your questions on the wines.
Call Me Back

Whiskey is recommended to use pure, enjoying every sip.

"Dynasty Decanter" Glenfiddich 42 Years Old, 1964 - exclusive, majestic malt whiskey, distilled in the Glenfiddich distillery in 1964, aged for 42 years in a vat of bourbon and bottled at natural cask strength 55.6%.

Rare whiskey requires exquisite design. Crystal decanter for "Dynasty Decanter" Glenfiddich 42-year-old is designed and manufactured by Atlantis, one of the world's leading manufacturers of crystal. Decanter like "sitting" in the Hexagon basket of solid sterling silver. The faces are decorated with gilded silver medallions, which depict dear ladies of the royal house of Stuart. It included a silver decanter stopper in the shape of a crown, the center of which - gold circle with the image of the King of Scotland, Jacob (James) VI, who became king of England, James (James) I in 1603. The total weight of the silver used is 14.5 ounces. Each bottle of 500 issued a stamp with the serial number and expanded the historical booklet and a certificate signed by the master. The bottle is packaged in shiny black lacquered box.

Products Glenfiddich is one of the best in the world. It is created on the distillery Glenfiddich Distillery, owned by an independent company, William Grant & Sons. For the manufacture of whiskey used the crystal clear water from natural sources, exposure is performed in old oak barrels, where alcohol acquires its unique characteristics. Glenfiddich constantly confirms the reputation of the best single malt whiskey in the world, receiving a large number of prestigious professional awards.

The company "Hart Brothers" was founded in 1964 by the brothers Donald and Ian Hart, and in 1975 they were joined by another one of the brothers - Alistair. The company was established for the wholesale trade of alcoholic beverages, as well as to form their own blends of whiskey. Today, "Hart Brothers" - is a company that is not only involved in the development of new blends of whiskey, but also their own bottled rare whiskeys. The work of the company actively participate sons, Donald and Alistair - Jonathan and Andrew. The main brand of the company is the line of "Finest Collection". For the production of whiskey in the traditional technology used exclusively with only gentle mechanical filtration and the rejection of any additives.