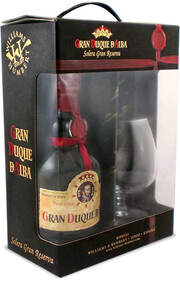 Similar to Gran Duque d'Alba, Coffret with 2 Glasses, 0.7 L
price
$ 44
Available
You can Notify Availability or buy another product
Add to wish list
Order by phone
+7 (495) 988-45-58 Call us
Our wine consultant (sommelier) will help you choose the wine to the table or as a gift. And will respond to all your questions on the wines.
Call Me Back

The taste of brandy smooth, full, with beautiful notes of vanilla and hints of oak balanced. In the long aftertaste felt shades of dried fruits and vanilla.

Brandy can be used as a standalone drink as a digestif in its pure form, and ice in cocktails or in combination with custard coffee.

"Gran Duque d'Alba" - noble brandy with a rich aroma with a characteristic ether and balsamic nuances and full of complex flavor with an incredibly smooth texture and beautiful tones of ripe fruit, vanilla, nuts and toast. Brandy is named in honor of the Grand Duke of Flanders, commander Alba. Set with two glasses will be a perfect gift for an anniversary or other special date.

"Gran Duque d'Alba" is created from a beautiful young fruity white wines from grapes of Spanish varieties Palomino and Airen, which are fermented at low temperatures, then lightly filtered, sometimes even save some sediment in suspension and double distilled. After that brandy matures for a long period of time in American oak barrels Oloroso sherry. Excerpt brandy is produced by the method of "Soler and kriadera" (Solera y criaderas). Technology "Solera" involves the simultaneous storage and aging of wines from different years of harvest. In the pyramid of barrels of Oloroso sherry, bottom row is called "solera", the rest of the barrels are called "kriadera." Brandy is bottled strictly in the bottom row of barrels, which are shown in one-third of the wine. This part of the wine from the barrels topped overlying layer of the pyramid. And so on until the top row, which is filled with wine. Total number of levels Solera usually is seven, but the pyramid "Gran Duque d'Alba" consists of 10 rows. The complete cycle of exposure such "Solera" is at least 10 years.

The company "Williams & Humbert" was founded in 1877 by two British gentlemen - Alexander Williams and acceded to the wife's brother Alexander Arthur Humbert. For more than a century, the company is a manufacturer of some of the world's most famous sherry and brandy. The winery is located in Jerez de la Frontera in Andalusia, where there is more than 1,200 acres of vineyards and the largest in Europe, wine cellar, equipped with the system Soler. In 1979, an international group "Williams & Humbert" acquired corporation Medina, whose members worked for many years in various industries sherry in Spain, and in 1960, through the efforts of Jose Medina, teamed up to create their own production. Today, the company is named "Bodegas Williams & Humbert SA", has several wineries in different regions of Spain and produces quite a wide range of high quality beverages: brandy, sherry, brandy, rum, and even - the only one in the world - produces a cream liqueur made from brandy category Salerno Gran Reserva.