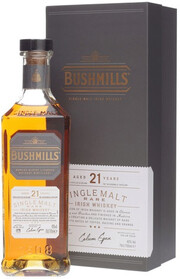 price
$ 363
Available
You can Notify Availability
Add to wish list
Order by phone
+7 (495) 988-45-58 Call us
Our wine consultant (sommelier) will help you choose the wine to the table or as a gift. And will respond to all your questions on the wines.
Call Me Back

The rich taste of whiskey with copious notes of raisins ends a long, complex aftertaste with hints of fresh mint and licorice.

The aroma of whiskey is dominated by shades of dark chocolate and toffee.

Whisky excellent as digestives in combination with cigar.

Single Malt Irish Whiskey "Bushmills" 21 Years Old is made ​​from pure unmalted barley, which is dried with hot air, which, unlike the peat fire, leads to a lack of smoky notes, usually felt in Scotch whiskey. After fermentation, the mash goes through three distillation in copper stills small size with relatively thin "necks". Due to the unique characteristics of the whiskey gets more light and smooth taste. The resulting distillate is aged for 19 years in barrels of American bourbon barrels and Spanish sherry. Then, two years in barrels of whiskey matures out of Madera. Such an intensive aging process gives the whiskey aromas of toffee and dark chocolate shades and raisins in a long, complex flavor.
"Bushmills" 21-year-old - a rare whiskey, produced in limited quantities, each bottle is individually numbered. This whiskey - the oldest in the range of the oldest distillery in the world.

Bushmills is considered to be the oldest distillery in the world, which has managed to obtain an official license to build temples. This event dates back to 1608 year, when the owner of the winery was a certain Thomas Phillips, who was in the king's approach in Northern Ireland. Not surprisingly, the "Bushmills" is considered to be the standard of quality for whiskey produced in Ireland.
Each generation owners "Bushmills" makes its literate, wise, commercial, professional and creative contribution to the development of the winery, improving its production capacity and product quality. Quite a long time the whiskey was created using peat drying the malt. "Bushmills" was the only company to apply this method in the vast Ireland. Special and unique Whiskey "Bushmills" also in the fact that it is created using only barley and used triple distillation. Today the company "Bushmills" decided to merge with the company "Kolereyn."