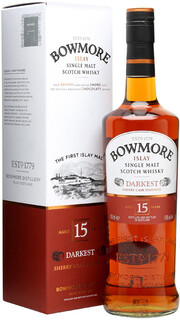 Similar to Bowmore, "Darkest" 15 years old, gift box, 0.7 L
price
$ 89
Available
You can Notify Availability or buy another product
9.3
Rating of WineStyle:
4
Add to wish list
Order by phone
+7 (495) 988-45-58 Call us
Our wine consultant (sommelier) will help you choose the wine to the table or as a gift. And will respond to all your questions on the wines.
Call Me Back

The taste of whiskey is incredibly balanced, smoky, with beautiful cedar notes and a touch of creamy toffee. The finish is long and warming with hints of sherry.

The aroma of whiskey with a characteristic haze Bomo, combines the gentle notes of dark chocolate and raisins.

Whisky is great in itself, is a perfect complement cigar.

Whisky Bowmore Darkest 15 Years Old is a line of standard whiskey from the company Bomo. Excerpt occurred at 80% in barrels of sherry, 20% in barrels of bourbon. Very harmonious and pleasant whiskey, an excellent example for his age. Awards: Silver and Gold medals at exhibitions International Wine & Spirit Competition, Grand Prix at the International Spirits Challenge.

Distillery Bowmore (Bomo) was founded in 1779, near the town of the same name, and is one of the oldest distilleries in Scotland. Bomo was the oldest, but not the only distillery in the area. The city grew and expanded along with the demand for whiskey. As a result, next to the plant Bomo, a host of handicraft industries involved in the production of whiskey.

Bomo founder was David Simpson. However, in subsequent years, the distillery changed a lot of owners. Simpson family sold the distillery in 1837 Bomo entrepreneur from Glasgow - James Ottomans that it has significantly expanded. The rich and fertile soil with peat Bomo allows you to collect a good harvest of wheat and barley. Then, in 1852, the Ottomans sell distillery, and until 1925 it passes into the possession of W & J. Mutter, then a change of ownership - Bomo distilled goes to William Grigor & Sons Ltd until 1950. And during the Second World War in buildings distillery located headquarters of the naval forces.

A new step in its development distillery was in 1963, when it was acquired by Stanley Morrison, founder of Morrison Bowmore Distillers Ltd. Morrison has been actively engaged in the export of products, and because of this in the coming years whiskey Bomo were presented to the international market. Whiskey Bomo received numerous awards at international exhibitions, as well as delivered to the royal court.

Still distillery Bomo uses its own production to add barley. The method of drying barley in Bomo traditional, barley overturned wooden shovel by hand, this method for hundreds of years. Drying barley is going on here in a shorter time than is generally, as well as the distillery has three floors to dry. Water is used for the production of the nearby River Laggala, which runs through the rich peat areas, which gives the whiskey a special "peat" flavor. Also on the distillery Bomo still used old warehouses located below sea level, so drink more saturated with salty flavors.