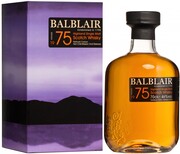 price
$ 371
Available
You can Notify Availability

Whisky has a sparkling golden color.

Full-bodied taste of whiskey, with a spicy sweetness, notes of vanilla, fudge, lemon and orange, opens against a background of floral tones. The finish is long and sweet, with a hint of butterscotch.

Whisky has an intense aroma with floral notes and bright colors of fresh fruits such as orange and lemon, with a sweet-honey tones and shades of green apple and skin.

Whiskey served as a digestif (pure or diluted) is recommended in combination with a cigar.

Single malt whiskey Balblair - this is a classic Scotch whiskey with a special delicate flavor, which is highly valued by experts. Whiskey produced in the ecologically clean region of Scotland, a unique water and mountain air which give this drink a special softness and freshness of taste.

Balblair - one of the oldest distilleries in Scotland, founded in 1790 in the village of Ross family Edderton, located on the coast of the Gulf of Dornoch. The word "balblair" There are two Gallic values: the city on the plain (town of the plain) and the battlefield (battlefield). Owes its name to the locality Vikings, who have gone to this place to the ground and established their outpost. Balbler - a fine example of rural wineries with well-preserved buildings of the XIX century. Pure water for the production of whiskey taken from the creek Ault Dearg. The logo depicts a huge stone winery Klah BIOR - a monument erected ancient Picts people over 4000 years ago. This stone and became the inspiration for Balblair manufacturers to create such an amazing and unique taste of whiskey. Passing under the management of the company Inver House Distillers Ltd in 2001, gamma ages whiskey has grown significantly. Balblair products dispensed in the form of malt whiskeys, and also used in blends of this company.

Inver House Distillers Company Ltd., founded in 1964 near Glasgow, produces many popular brands of whiskey, including Balblair, Old Pulteney, Speyburn, Hankey Bannister, anCnoc. The company appreciates and adheres to centuries-old traditions in the production of premium whiskey. About unsurpassed quality drinks say numerous awards and high ratings of experts. In 2010, the whiskey company Inver House Distillers Ltd received 13 awards in the competition "International Spirits Challenge", 8 awards in the Beverage Testing Institute's International Review, 19 awards at the international competition "International Wine and Spirit Competition", as the company was awarded the title "International Distiller of the Year "(" Best International manufacturer of whiskey ").