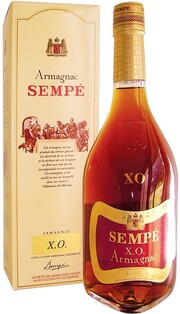 Similar to Armagnac Sempe XO, gift box, 0.7 L
price
$ 60
Available
You can Notify Availability or buy another product
Add to wish list
Order by phone
+7 (495) 988-45-58 Call us
Our wine consultant (sommelier) will help you choose the wine to the table or as a gift. And will respond to all your questions on the wines.
Call Me Back

Armagnac - a great accompaniment to a digestif and cigar.

"Maniban" Armagnac, 1990 - Armagnac with an unbeatable aroma and perfect taste. It is composed of a mixture of alcohols obtained by the distillation of wine from grapes Colombard, Folle Blanche and Ugni Blanc. Humid climate and sandy-silty soils of the region - the ideal conditions for the production of Armagnac best in the world. The aging process takes place in casks of black oak Gascony. This oak twice richer tannins than Limousin oak, and three times richer than the US.
"Maniban" Armagnac 1990 in a wooden box is the perfect gift for any occasion, especially a birthday with the same birth year!

History of the Firm Kastared began in 1832. Baron Georges Haussmann, who comes from a German family, became the manager of a small town called Nerac in the north of Gascony. In those days, the most efficient from an economic point of view was the waterway, and since the town is a few steps from the navigable river Baise, Georges Haussmann decided to use this advantage for the organization of trade Armagnac. Thus was the first house negotsiantsky Castarede, which was named for the owners. After some time, the Baron left Gascony, but the house has not stopped his work and "live" to the present day.
Here is the sixth generation of the family in the face of Florence Castarede Kastared pleases the whole world unsurpassed Armagnac. No crisis may affect the well-being of the company, because the reputation of products - the most important thing for the house Kastared. Unique cellars with more than a century of age, located on the banks of the River Base, contribute significantly to the quality of drinks: this is the perfect place to mature a little gruff and bluff alcohol from armanyachnogo alambika. Twenty years ago, the family acquired the estate of Chateau de Maniban and became the owner of 20 hectares of magnificent vineyards.

House Armagnac Sempe was founded by a representative of an ancient French family Sempe, Abel Sempa, in 1934. Abel for many years was a senator of the Department of Gers, however, he had a dream - the creation of spirits of exceptional quality, which will bear the name of Sempe. Armagnac house Sempa first saw the light in 1950 and since then they have conquered the hearts of gourmets around the world. Today the name Sempe - the personification of the highest quality and a symbol of the centuries-old tradition of Gascon culture. Despite its venerable age, Henri Abel Sempa still supervises farming, personally supervising every stage of production.

Today the brand is owned by a group Sempe Armanoir, which included many farms Armagnac. The annual production capacity of Armagnac Sempa is 1.5 million. Bottles.