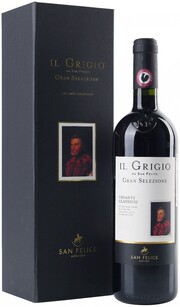 The wine has a well-structured, rich and at the same time mild flavor with notes of juicy fruits, wonderfully balanced acidity, velvety tannins and a pleasant aftertaste.

The wine has a generous, persistent flavor, blend harmoniously in shades of violet and blackcurrant, spicy notes of tobacco and liquorice.

"Il Grigio" Gran Selezione - delicious red wine, which will take its rightful place on the holiday table. It is made from a blend of Tuscan grape varieties. Grape varieties Abrusco, Pugnitello, Malvasia Nera, Ciliegiolo and Mazzese were added to the Sangiovese for its enrichment, allowing wine to fully express the complexity of the terroir of San Felice. In 2010, the harvest was carried out in the second half of October. Alcoholic fermentation took place in stainless steel tanks, maceration at a temperature of 28-30 ° C lasted 22 days. At the end of malolactic fermentation was carried out for 24 months aging in barrels. 50% of the wine matured in barrels of Slavonian oak, Chapter 60-100, and the remaining 50% - in French oak barrels of 225 and 500 liters. Before sale "Il Grigio" Gran Selezione further kept 8 months in bottles.
On the label - a medieval knight with a beard. Pictured Titian, Knight is the personification of this noble, luxurious wine.

History of San Felice back to the beginning of the XX century, according to documents found at this time there was the arrival of San Felice, dedicated to the martyr San Felice da Nola. The temple and the farm is next, experiencing all the historical vicissitudes. Together, they were subjected to various types of control - both religious and control by powerful families. It was only at the beginning of the XX century family Del Taya took control of territory and turned the farm into a successful enterprise. The prestige of this family confirms the fact that they were among the founders of the famous Consortium Chianti Classico (their famous logo with a black rooster).
Time after the Second World War was for San Felice decadent, as well as for the entire region of Chianti. But in 1968 fortune turned in the direction of the company, it becomes the largest financial groups. Enzo Morganti - sighted manager with extensive experience in the cultivation of Sangiovese, laid the foundation for scientific research, which initially aimed at improving the capacity of the class.

Today, the company Agricola San Felice is known worldwide for its innovative ideas and perfect quality of products, so it has achieved great success. Philosophy San Felice is striving for excellence in manufacturing, which is achieved through research, experimentation, as well as the preservation of important relationships with the local terroir. From 1970 to today the company conducts a policy of continuous improvement and updating of vineyards and wine production technology upgrading, not forgetting to protect and take care of the ancient traditions.